By innergoddesstarot on October 11, 2014 in Life, Relationships 1

I’m not going to miss this one!

I stayed up most of the night to watch the Blood Moon eclipse the other day…the peak wasn’t until about 6:30am or so, but I was anxious about missing anything. I’m sure that my husband enjoyed the on going breaking news reports of, “I think the shadow is starting” or “Oh no, the clouds are starting to move in” and “It’s ok, the clouds are gone now”, culminating in, “You have to come and take a look, it’s red!”.

I feel really grateful about the whole thing. I have tried to view the various Super Moons this year, only to be thwarted by clouds, but the eclipse was like a gift for me! The moon was perfectly positioned outside our bedroom window, and I had a premium view of the whole process. It amazed me, buses were roaring down the dark street, people were out jogging or sitting on the porch smoking, this mesmerizing and majestic event was occurring in the sky and yet normal life kept going on. Well, for some! For me, things were about to get a little unusual. 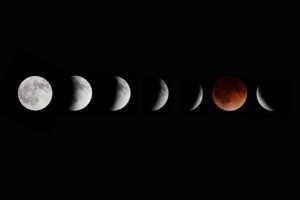 Phases of the blood moon eclipse

Is that what I think it is?

My husband got up at the usual early hour and headed for the shower while I was still watching the moon. Some movement in the street right below the moon caught my eye, but I couldn’t quite make out what I was seeing. It looked like there was a black cat in the middle of the road, kind of nudging or sniffing at another, smaller creature. I could tell it wasn’t another cat, or a squirrel…soon the black cat seemed to get bored and stroll off, and when the other animal finally moved, I realized it was a rabbit. My husband joined me at the window and confirmed my I.D.. We watched the scene for a while, getting more and more anxious as morning drivers started swerving around the creature. Finally, with my husband’s encouragement, I threw my coat over my pjs and ran outside (I was wearing my glasses and no makeup, so you KNOW it was an emergency!).

Justified Jay-walking and a Rescue Operation

There is a lot of construction in our area right now, and the morning rush hour traffic was starting, so I had to run a half a block down the street to the crosswalk, cross the street, then run back to the bunny, all the while in a bit of a panic. When I got there, my husband was already standing over the poor thing in the middle of the road, having a look (he left the house after me but had the guts to jaywalk due to the urgency of the situation). It was indeed a little domestic bunny, fluffy and brown, wet and cold, and in great distress. We were kind of scared that he’d bite or scratch us, and we hadn’t thought of bringing a towel or blanket or anything, but desperate times call for desperate measures. Matthew (my husband and my hero!) gingerly scooped up the tiny fellow (ironically he had had to rescue a stunned squirrel from the road in a similar way earlier in the week) and we ran back across the street to our home. 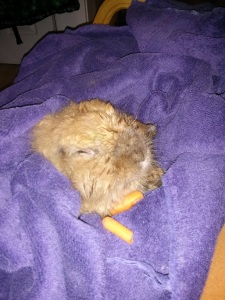 Moony just after we found him

The rabbit seemed ok, in shock of course but I couldn’t see any blood or obvious injuries, so we wrapped him in a blanket and put him on our IKEA POÄNG chair in the kitchen where it was warmest. I have never seen such a sad little bunny sight. He was wet, cold, matted and shaking, and seemed quite happy to stay exactly where he was. Matthew and I naively assumed that this rabbit had accidentally gotten out of the house and that there was probably a little girl somewhere down the street crying for her darling pet. After a bit of investigating (the details of which I will keep to myself to protect the innocent and not so innocent) we were pretty sure that this rabbit had been deliberately abandoned, left outside for quite sometime to fend for itself by his owner.

And, later that day when I went to give him a bath, I realized that he couldn’t move his hind legs.

So, now three days later, we still have little Moony (that’s what I decided to name him, for obvious reasons) living with us. I took him to the vet, who said that he is skinny, malnourished, dehydrated, in shock, matted…and she doesn’t know why he can’t move his legs. Moony was so stressed out and scared, we didn’t want to traumatize him further with examinations or grooming, so at this point I’m giving him medication every twelve hours in hopes that it will help him to start hopping again. But it’s a long shot.

The Kindness of Strangers 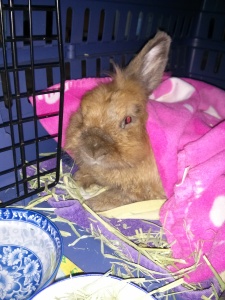 I know there are much more terrible things going on in the grand scheme of things, but during this adventure I was really struck by the careless and cruel things that some people do, as well as the huge capacity for kindness there is out there. That first day I went to our local pet shop, Wag on the Danforth, to get Moony some supplies, and upon hearing my story the lovely owner there gave me some rabbit pellets, shampoo and the loan of a carry-case for him to sleep in (they call it the “Karma Case”). While I was with the vet, a very kind woman who was there with her cat heard my story and offered to give me a big rabbit hutch, water bottle and other necessary accessories (her pet had died a year ago) for free. She brought it over the next day, and helped me to set it up. She even gave us the Beatrix Potter Peter Rabbit bowl that her bunny had used for his hay. Friends and family keep calling, emailing and posting on Facebook to ask how Moony’s doing, the kindness is overwhelming.

Moony is a lot of work right now, because he can’t move too much and needs a lot of care and cleaning, but my husband and I are already so attached to him. He’s one tough little bunny – after all he’s been through, we are so happy to see him eating hay, devouring veggies, and generally getting perkier and perkier.

The Rabbit in the Moon

My husband and I lived in Japan for a few years, and we loved the story of the Rabbit who lives in the Moon. We got used to seeing the shape of a rabbit, rather than the Man in the Moon, when we looked up at the night sky. There are actually many stories in East Asian folklore, and interestingly also in Aztec mythology, about this rabbit, but in Japan, it is said that the rabbit in the moon uses a mortar and pestle to make delicious mochi rice cakes, and in the autumn moon-viewing season people eat mochi sweets shaped like rabbits. As I was standing at my window, watching that full Blood Moon, I really thought that the rabbit in the moon had come down to pay us a visit. I guess I still do! Whatever happens, we’re enjoying our time with this lion-hearted little fellow. 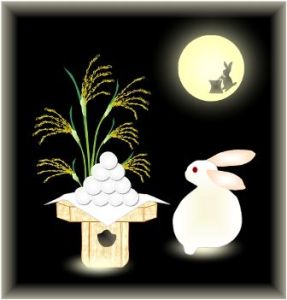 The Rabbit in the Moon with his mochi/rice cakes

Energy Follows Intention: Reiki with Shelly
Unmask Your Intuitive Side: A Weekend of Wisdom with Mary K. Greer