By innergoddesstarot on April 1, 2015 in Learn Tarot Reading, Major Arcana 0

I often feel like a fool, foolish, not fooling anybody, just fooling around…I tell myself to smarten up, get serious, grow up, but honestly, it never seems to stick. So, in honor of April Fools’ Day, let’s talk about how I came to embrace my inner fool, and why you will want to do the same! 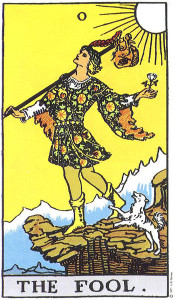 The Fool card from the Rider-Waite-Smith Tarot deck

A Fool for Tarot

When you hear the word “Fool”, what immediately comes to mind? I can imagine it’s one of the phrases I mentioned above, or some other cliche, but I’m betting that it’s something negative, a state to be avoided. This is often the reaction I see on people’s faces when The Fool card appears in their Tarot reading, accompanied by a rueful laugh. Depending, of course, on the question they asked or the position that the card appears in the spread, I usually tell people that this is not a negative or judgmental card…in my experience, the appearance of The Fool usually heralds adventure, potential, spontaneity.

Zero – Nothing and Everything

The Fool is a bit of a controversial figure in the Tarot. Take a look at the Rider-Waite-Smith image – the Fool is numbered “Zero”, so where exactly does he fit with the other Major Arcana cards (numbered 1 – 21)? Some readers place him at the start, because he is pure potential, nothingness, the Cosmic Egg, while some put him at the end of the series, representing completion followed by rebirth. Others see him an independent figure who dances or journeys through the Tarot, representing our own personal experiences as we go through life. 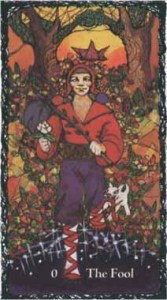 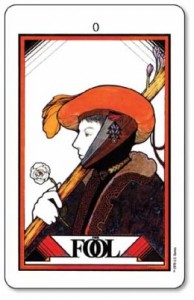 What does the Fool mean?

To me, the Fool bears a message. He tells us to live in the moment, stop thinking all the time, to step lightly and believe that everything is just going to work out. Take a look at the card…the Fool seems to be perched on the edge of a cliff, with no awareness of or concern about the danger below. His little white dog could be warning him not to be so reckless, or could be his faithful companion that will follow him to the end. When the Fool appears in a Tarot reading, he is often telling us to take that leap of faith, to live joyfully, to let go of expectation and fear.

In my mind, the Fool is a joyful card, he is the state of bliss we hope to reach in meditation, he is the open heart, the sponge, the vessel ready to be filled. He is that state of pure potential, but in order to fulfill that potential, we have to TAKE THE LEAP. That’s when the real fun begins.

What are YOU a Fool for? How do you embrace your inner Fool? Let me know in the comments below. 🙂 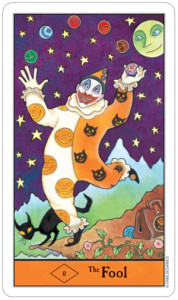 Have you seen my handpainted Sterling Silver pendants? Take a look…here’s a fun way to embrace the Fool in your life!