By innergoddesstarot on January 7, 2016 in Life, Major Arcana, Tarot for Empowerment, Tarot Philosophy 0

In Tarot, each year is associated with a particular Major Arcana Tarot card. You can determine which card by doing some simple math (please don’t tune out now, I’m not a math fan either but hang in there): 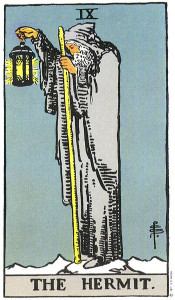 And the number 9 corresponds with the Major Arcana card, The Hermit.

What do you think of when you hear the word Hermit…

A solitary figure, cloaked in gray, white beard, living alone on a mountain top or in a cave…

Someone wise, with power, but gruff, imposing and not so easy to approach…

As a huge nerd, when I see that Hermit card I see Gandalf, Obi-wan Kenobi (in Star Wars: A New Hope), Luke Skywalker (no spoilers)…I see a wise, experienced and somewhat world weary figure who has withdrawn from the world to think, to contemplate, who usually gets pulled back into mundane society when we desperately need their help.

We determine the Tarot card associated with the year to give us an idea of what we can expect for the months ahead, the atmosphere, possible opportunities and challenges, to understand how to ride the energy of the year to the best advantage of everyone on the planet.

A Hermit Year is a quiet, introspective one. It is a time when we may feel the urge to withdraw, to spend time thinking and finding answers within. Because the Hermit is also a teacher or mentor figure, this may be a year when we are looking to the sages, gurus, mystics and philosophers that we trust to find resolution for all the chaos and violence that we experienced globally last year and to look for ways to shift away from these patterns that just aren’t working anymore and shouldn’t be allowed to grow.

In a Hermit year, it is a good idea to be thoughtful, slow to action rather than reactionary, to try to see the bigger picture and understand the universal issues and lessons in play. There may be a temptation to cut ourselves off from each other, to try to hide from the realities of life, but this won’t serve us well. Take a look at the image of the Hermit card…he is insulated from us by that heavy cloak, but he holds a light, a star that shines out to inspire and guide us. This says to me that 2016 is a good year to be introspective, to find answers within, and also to SHARE that new found wisdom with those around us. 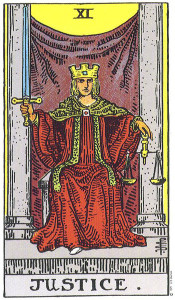 The Hermit is the universal Year Card, but as individuals we all have our own, personal Year cards, and it is useful and interesting to see how they compliment or conflict with the universal card. My 2016 Year card is Justice…I feel that this carries some of the weight and gravitas that we see in the Hermit. A Justice Year is usually a time of taking responsibility, making correct decisions, doing what you feel is right and ethical, so I think that the energy of the Hermit will help me to look within and determine the best course of action.

Embrace the Hermit, take the quiet time you need, spend time on your own, get to know yourself…and be sure to come down from the mountain every once in a while and share your light with others. All the best for 2016!

Do you know what your 2016 Year Card is?
Looking for some insight into how to make 2016 a year of prosperity, love and adventure?
My cards and I are ready to go! Click here and book your New Year Reading today – hit the ground running in 2016!