By innergoddesstarot on July 29, 2022 in Tarot for Empowerment 0

Over the past few months, I’ve been introducing you to the Major Arcana of the Tarot, the cards that are the heart and soul of the deck.

We met the Tarot Fool, and played with him for a while, and then we encountered The Magician and The High Priestess.

Now, we’ll move forward to the next two cards, another powerful duo, The Empress and The Emperor.

There are 22 Major Arcana cards, and they are numbered from zero to 21. The Major Arcana represent the archetypes, lessons, milestones, initiations, opportunities for growth and transformation that we encounter as we live our lives on earth in these ephemeral physical forms. When they appear in your Tarot readings, pay close attention to them, because they always deliver a significant and helpful message.

And now, let’s move on to the next two cards. First, The Empress, Arcana 3.

The Empress is Mother Nature, as well as the Goddess of Love and Beauty. She’s the Great Mother Goddess of every ancient religion. She’s abundance, compassion, sensuality and the force that inspires us all to thrive and grow. Everything she touches flourishes. 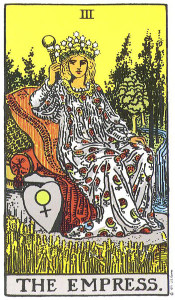 The Empress sits at ease in her power, holding a scepter and wearing a starry crown, emblems of her sovereignty in heaven and on earth. Her throne is piled with luxurious cushions, and she resides not in a cold palace but deep in the heart of lush nature. Water flows towards her, grain ready to be harvested leans in her direction with the help of a gentle breeze, and the lush green trees behind her support and protect her.

The pomegranates adorning her gown represent fertility, we see the symbol of Venus on her shield, and there’s a hint that she may be pregnant or certainly in the full bloom of health and vitality. The atmosphere of this card is expansion, and something about to be born, whether this is literally a baby, or perhaps a creative project coming to fruition.

So, what does it mean when the Empress appears in your cards? 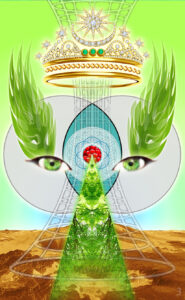 When the Empress appears, she is inviting you to feel your own power and to glory in your feminine side. She lets you know that you can be a force to reckon with in the world without losing your sense of compassion and generosity. She reminds us of the importance of self-care, that in order to help or serve others, we need to love and care for ourselves first.

The Empress also encourages you to find pleasure in the here and now, to appreciate your physical body, and to do what feels good. Eat and drink well, admire or create works of art and music, get outside and enjoy nature.

And now, meet The Emperor, Arcana 4.

Time and the weight of a heavy crown have taken their toll on the Emperor. He’s strong, but he isn’t a young man anymore. His white hair and impressive beard give us a sense of how long he has occupied his throne, overseeing his empire and keeping it safe and secure. 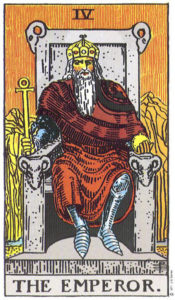 Although we can’t see any impending threats in this scene, the Emperor is wearing armor and he looks keenly towards the distant horizon. He remains in a constant state of vigilance, sitting in a solid and angular stone throne that’s clearly not meant for lounging or comfort (very different from the Empress’ cozy cushions!). Even the rams’ heads on the throne look off in different directions, as if they’re watching for danger as well.

The Emperor is surrounded by a stark, rocky landscape. We can see a trickle of water in the background, but nothing grows here. This empire is established and secure, the Emperor is concerned with maintaining and consolidating it, rather than expanding it.

The mountain peaks in the background blaze orange with the light of sunrise or sunset, reflecting the fire and fortitude of this monarch. He wears a rich, red cloak, a solid, golden crown, and holds an ankh-shaped scepter in one hand and an orb in the other. His authority and determination are limitless and never-ending.

So what does it mean when the Emperor appears in your cards? 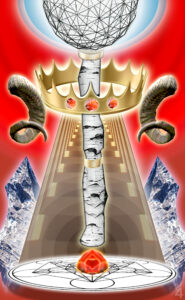 When the Emperor appears in your reading, he’s telling you to step up and to take on a leadership role. The time is right to implement some structure in your life, and to make sure that you’ve built a solid foundation for yourself personally and professionally. This card asks you to be an adult and take responsibility for yourself and those who depend on you. If you need some help with this, turn to someone in your life who embodies those Emperor characteristics and follow their advice. Work within their structure until you have the experience and wisdom to run your own empire.

What do you think of The Empress and The Emperor? Who would you rather share a conversation with? What would you ask them?

Next time I’ll introduce you to the next two cards that the Fool meets along his journey, The Hierophant and The Lovers. Join us! 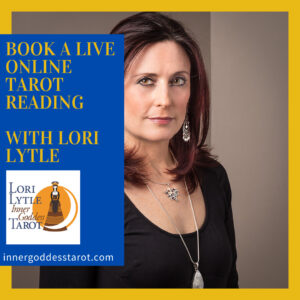 Tarot Tip: Find both the Mystical & Practical advice in your Card-of-the-Day
Tarot Tips for Introverts