By innergoddesstarot on June 27, 2022 in Tarot for Empowerment 0

In last month’s post I introduced you to the Major Arcana of the Tarot, the cards that are the heart and soul of the deck. We met the Tarot Fool, and danced with him for a while, and now we’ll move on to the next two Majors, numbered One and Two, going by the names of The Magician and The High Priestess. 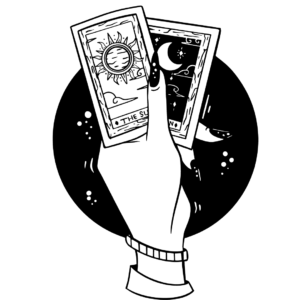 There are 22 Major Arcana cards, and they are numbered from zero to 21. The Major Arcana represent the archetypes, lessons, milestones, initiations, opportunities for growth and transformation that we encounter as we live our lives on earth in these ephemeral physical forms. When they appear in your Tarot readings, pay close attention to them, because they always deliver a significant and helpful message.

And now, let’s move on to the next two cards. First, The Magician, numbered 1. 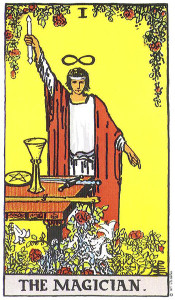 The Magician demands attention. Attention from you, and from the universe. It’s a joy to watch him, he’s so skilled and confident in his power, you can’t look away for fear of missing one of his mesmerizing tricks. But, deep down, you know that they aren’t actually tricks, that the Magician really can do magic, and that’s thrilling.

The Magician raises his double-pointed magic wand to the heavens like a lightning rod. Power flows through the wand, and through him. He is a channel for that celestial power, but he also uses his own abilities and force of will to shape that energy into whatever he needs or desires on this material plane. As above, so below.

The infinity symbol that floats over the Magician’s head reminds us he has access to infinite power, all he has to do is tap into it. His confidence in himself and his ability to manage and manipulate that power is also limitless.

The red roses and white lilies flourishing around him show his passion and purity of purpose. We see this theme repeated in his red and white robes.

A cup, wand, sword and pentacle, the symbols of the four suits of the Minor Arcana (more on that in future Spiritual Niagara Insights, I promise!), representing the four basic elements of water, fire, air and earth, lie ready on the table in front of the Magician. He understands the nature of the world that we live in, and he knows how to use the resources that are around him. He’s always in his element.

So, what does it mean when the Magician appears in your cards? 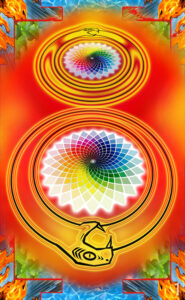 The Magician lets you know that your magic is strong right now, and if you use it, you can accomplish anything and everything. Get out of your own way and let your power flow.

If there’s something that you have been meaning to do or start or try, but you’ve been holding back, now is the time to act. You don’t need to take another class, get another qualification, or wait until the stars come into alignment, you have all the talents, skills and experience that you need to achieve your goal right now. So just do the thing. 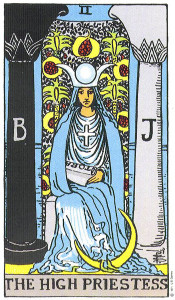 The High Priestess has a special place in the hearts of most Tarot readers. She is the mystic and the seer that we all want to be. She’s the keeper of mysteries, she knows all and sees all. She communicates through intuitive messages, visions and dreams. Like a really good Tarot reader, the High Priestess will accompany you on your journey into the deepest parts of your soul, but you need to find your own truth. She guides, but she won’t spell it all out for you.

The High Priestess sits at the gateway between the worlds. She wears the triple moon crown, the waxing, full and waning moons move through their phases above her head. A crescent moon rests at her feet, and her robe pours around her like water.

Here we’re in the world of intuition, the divine feminine, and honoring the cycles of life. The High Priestess flows with the constant current of her intuition, letting it take her where it will. She’s the Triple Goddess, the Maiden, Mother and Crone. She’s Persephone, who spends half her time in the shadowy world of the dead, and half in the bright world of the living.

The High Priestess is poised in perfect balance between black and white columns, Boaz and Jachin, from Solomon’s Temple in Ancient Jerusalem, symbolizing contrasting forces like light and dark, day and night, mercy and severity, yin and yang.  The equal armed cross that rests on her heart emphasizes her equilibrium and her connection to the divine.

She holds a scroll in her lap, tightly rolled up and partially hidden by her robe. We see the letters TORA, hinting that it contains words of timeless wisdom, but there is a task that we need to complete or understanding to gain before we are allowed to read it.

The veil behind the High Priestess is covered in pomegranates and palm leaves, symbols of fertility, arranged in the pattern of the Tree of Life. The pomegranates again bring to mind the story of Persephone and the cycles of life and death.

So, what does it mean when The High Priestess appears in your cards? 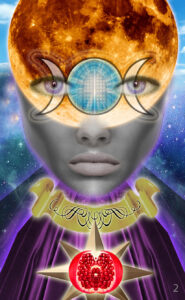 The High Priestess invites you to trust your inner voice implicitly, it will never lead you astray. Your intuition is your own best source of information and wisdom, so let it flow freely through you. Get to know how it feels. Use your psychic gifts and powers of perception to look beyond the mundane and obvious, and see right to the heart of every matter. Know that you can dive deep into the mysteries of the universe without losing yourself in that vastness.

On a practical note, keep your cards close to your chest, you don’t need to reveal the mysteries and insights that you discover. Not everyone is ready to hear what you have to say.

What do you think of The Magician and The High Priestess? When was the last time you used your magic? What is your intuition telling you right now?

Next time I’ll introduce you to the next two cards that the Fool meets along his journey, The Empress and The Emperor. Join us!

The Sun Tarot Card and the Summer Solstice
Tarot Tip: When you need a confidence boost