My sister, Angela Lytle, and I have always had a fascination with good luck charms, talismans, tangible representations of protective symbols and deities (especially when it was something that we could wear!). I’m so happy to post this article written by sister, about her latest discovery, the Cimaruta. Please stay tuned, I will be adding some sterling silver reproductions to my online shop soon. 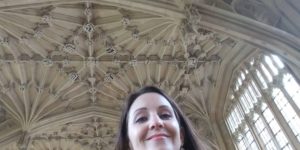 In September, my work called me to Oxford, the home of many fantasy and occult novels that have fuelled my imagination over the years. The echoes of those stories, and the minds that conjured them, seem to seep from the cobblestone streets and gawking gargoyles of the exclusive colleges like wraiths calling for attention to the numinous and the mysterious. Indeed, no doubt their inspiration came in no small part from the ancient manuscripts of the Bodleian library, and the curated colonial collections of Oxford’s incredible museums, among the oldest in Europe.

Among the collections of folk and cultural objects found in these museums, top of my list was the Pitt Rivers Museum, where I was excited to explore one of my primary passions: amulets, charms, and talismans.

The Pitt Rivers museum has an eclectic collection of more than 6000 amulets and talismans from around the world, displayed together in a curious gallery in which all items are arranged by affinity, rather than by region or cultural group of origin. The museum has many objects of interest: masks from Nigeria, Turtle Island (modern western Canada), Japan; textiles, images of deities, folk arts from regions under the thumb of the vast British empire as well as from throughout Europe.

For me, though, I couldn’t wait to see the amulets: it is rare to see so many charms in one location. Bent over glass cases filled with intriguing talismans as varied as the places they originate from, my eyes lighted on what was, for me, a discovery: beautiful silver amulets formed of twisted branches, hung with various symbols immediately familiar to a pagan or witch – the crescent moon being the most central and visible therein. 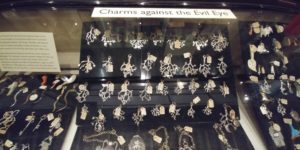 I had never seen a cimaruta, or “sprig of rue” charm before, and my heart quickened as I pored over the case and the scant information available about them in the museum and excitedly texted photos to my sister. Pitt Rivers collected at least several dozen of the charms throughout Italy; I was overwhelmed with the quantity, and the implication that these clearly pagan symbols had survived in popular form for so long. I dreamed of rue branches, laden with silver charms, and began the search to explore the mystery of the cimaruta. 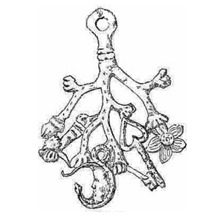 The cimaruta is a protective talisman, also referred to as the witches’ charm, that has been common in Italy since ancient times. The talisman is formed in the shape of a sprig of rue (“cimaruta”), long considered an herb of protection and spiritual cleansing, hung with a range of charms with protective and spiritual power.

Since ancient times, throughout southern Europe, rue branches were hung in homes or worn on the body with protective charms, evolving into a silver amulet worn to ward off the “evil eye” and to draw spiritual protection to the wearer. Rue is also an healing herb used for multiple purposes, including as a stimulant. In parts of Latin America, rue (Spanish “ruda”) is still a key herb used for the ‘limpia,’ or spiritual cleansing.

The cimaruta amulet is made of silver, the metal of the moon, evoking the goddess Diana/Artemis, who has been worshipped and honoured since ancient times, even after the spread of Christianity. Many of the symbols are ancient associations with goddess Diana in her many forms as protector of childbirth, lady of the seas, lady as maiden, and so on, including the moon, heart, fish, and bird. According to pagan author Raven Grimassi, the cimaruta was worn by devotees of Diana to invoke her protection but also to identify practitioners of the “old religion” to one another.

The most common protective symbols found on the variations of the cimaruta include:

Crescent moon: lunar energy, protection of and for the feminine; Diana-Artemis, the divine feminine

Key: Diana’s key to the gates of heaven, allowing the moon to travel across the sky; or symbol of Hekate, goddess of the crossroads (R. Grimassi); the key that opens the portal between the worlds; esoteric knowledge

Flower: the rue flower, artemisia – associated with protective qualities of the moon; or a vervain blossom – connection to faery realm (according to R. Grimassi)

Hand: symbolizing strength and protection against the evil eye, warding away of malevolent influences or ill wishes

Looking for your own cimaruta? Check back soon and sign up for my newsletter to find out when I will be offering them, charged up specially by me!