By innergoddesstarot on May 28, 2018 in Learn Tarot Reading, Minor Arcana, Monday Motivation 0

This morning I am exhausted. 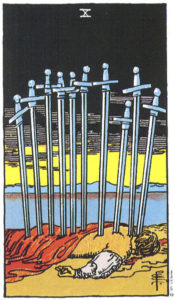 It’s all good, I am exhausted from a wonderful and busy weekend. I read and taught Tarot at the Elora Tarot and Divination Festival on both Saturday and Sunday, in between driving back to Toronto to perform a wedding on Saturday night.

I pulled this card and thought, yes, this is indeed me. I am exhausted. I am depleted. I would like to lie face-down and just let all the energy from the weekend seep out of me so that it can be replaced with new vitality.

I recognized the message here for me, but being such an evocative image, I wasn’t sure that I wanted to unleash it as the theme of Monday Motivation. So, I shuffled well, and again drew a card, asking for the message that would be of the most benefit to everyone who came upon my post, and lo and behold, the Ten of Swords appeared again. So be it.

Here’s what I posted for my Today’s Tarot Message on Facebook:

“Today’s Tarot Message: Ten of Swords
Whatever it is that has been causing you stress and exhaustion, it is DONE. Let it die. You have nothing left to give, and there is no need for you to sacrifice or strive any further. This kind of ending can be painful, but it is also a necessary release and relief. There is nowhere to go but up. Surrender to it, and know that you are on the verge of a new start, a new dawn.”

Today, the theme of exhaustion and just generally being DONE rose to the forefront.

It can represent a stressful situation, or a painful line of thought, that you just don’t have the energy to continue.

At other times, this card can point to having experienced a betrayal. It appears that the figure on the card has been stabbed in the back, not once, but ten times. Something may have happened that was that straw that broke the camel’s back, and you simply can’t take any more.

This card represents a definitive ending. It’s the pause and exhalation when you hit rock bottom. It’s the dark before the dawn, but the dawn IS coming.

[bctt tweet=”The Ten of Swords represents a definitive ending. It’s the pause and exhalation when you hit rock bottom. It’s the dark before the dawn, but the dawn IS coming. #tarot” username=”InnerTarot”]

Being the suit of Swords, we are in the world of the mind, communication, logic, truth and cutting honesty. What way of thinking needs to come to an end? What ties need to be severed?

Being a Ten, we see something coming to an end, so that something new can begin.

So what might the Ten of Swords represent in regards to a specific topic?

Ten of Swords in Love: An ending. Perhaps you’ve been trying to sustain or save a relationship that just can’t be salvaged, it is time to let it go. If you have experienced a betrayal or a difficult break up, don’t fall into a pattern of seeing yourself as a victim or a martyr, life will soon seem bright again.

Ten of Swords in Career: Time for a change. The career path you have been pursuing isn’t capable of taking you where you want to go, or your current job has taken you as far as it can. And, you have been putting yourself in an incredibly stressful situation that just isn’t going to pay off. Cut your losses, and start fresh.

Ten of Swords in Well-being and personal growth: Exhaustion. Depletion. Nothing left to give. Surrender to it, and then start looking for ways to support your healing and foster well being. On a literal level, this card has come up representing back pain and spinal issues, as well as acupuncture.

When the Ten of Swords appears, there is an opportunity for release and relief. There is a peace and beauty in knowing that something is truly over, and that you are free to move forward to a new phase of life.

[bctt tweet=”When the Ten of Swords appears, there is an opportunity for release and relief. There is a peace and beauty in knowing that something is truly over, and that you are free to move forward to a new phase of life. #tarot #cardoftheday” username=”InnerTarot”]

Need more specific insight into your own situation? My One Question email reading is short, sweet and gives you the answer you need. 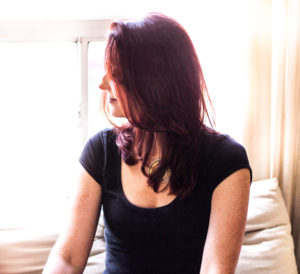 This is for those who love Tarot but would rather poke their own eye out than read for other people
Monday Motivation: Two of Pentacles