By innergoddesstarot on October 18, 2021 in Make the Most of Your Tarot Reading, Tarot for Empowerment, Tarot Magic, Tarot Philosophy 1

Last weekend I performed a wedding in Toronto. (Yes, along with being a Tarot reader, in my other life I am a Metaphysical Minister and I have the happy vocation of marrying lovebirds.) 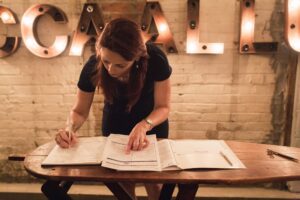 I have recently moved outside of the city, but I’ve been coming back into town almost every weekend for weddings that I booked long before I even contemplated moving away from the big smoke.

This is sometimes a logistical feat of epic proportions, depending on the location of the venue. And, I am a stickler when it comes to arriving on time, early is even better. This particular wedding was outside of the downtown core, so it involved my husband driving me to the nearest GO Train station to our home (about half an hour), a one hour GO train ride, a 25 minute subway ride, and a 10 minute bus ride.

On the way to the GO station there was construction and I made it to my train with about 30 seconds to spare. I had enough time for the really nice station attendant to compliment me on my shoes as I ran by, and for me to tell her the brand and how comfortable they are, and still board the train before it rolled out.

When I arrived in Toronto, I took the subway for the first time in ages (I’d been avoiding it during the pandemic) and at first I was overwhelmed with euphoria at how I could get myself around so independently on the transit system (as compared to my new life in the countryside), which quickly turned to annoyance at the delays on the train and waiting so long for the bus along with slight vulnerability caused by unmasked travelers clearly waiting for someone to say something about that.

Of course I give all my love and attention to my weddings, but I also have a strategic plan of how I am going to get myself back home in the fastest way possible. When I’m wearing officiant garb, and entrusted with precious marriage legal documents, I don’t like to hang around or make other plans, my mind is on the goal of successful completion (and hitting the couch with my sweetheart, my cat, and a glass of wine).

I won’t go into details, but let’s just say that there were some small hiccups in that wedding that meant it wasn’t going to start on time. All the main components were in place, the Bride and Groom were SO ready to go, but someone forgot to bring the marriage license (which the Bride wasn’t told and I sure wasn’t going to be the one to grass out the perpetrator) and the bride’s veil didn’t make it to the venue.

On a purely selfish note, this meant that my dream of the express train was out. As was the tantalizing whisper of hope of an even earlier train. I was holding onto the one that would get me home in time to relax and have dinner before another busy day, and also the weather was turning very rainy and blustery and I didn’t want to get caught in that.

Long story short, I performed the ceremony, and then waited afterwards during family photos for the return of the prodigal license (while fielding questions from confused members of the wedding party and family members). I was not going to leave this couple merely symbolically married, I wanted everything signed, sealed and delivered.

The license finally appeared, the documents were signed by all necessary parties, and off I ran. Instead of waiting for the bus, I took an Uber to the subway station, now in pouring rain, and sprinted onto the train. The subway was slow, but moving. I was going to make my connection, with barely minutes to spare. Then, at the stop before the stop that would take me to my transfer to the GO Train, a garbled announcement came on saying that this train would not be stopping at my station, it would be bypassing it due to a police investigation. I don’t want to repeat for you the words that came out of my mouth at that point, but I think you can imagine. (They were quite rude.)

I had two choices at this point. The first was to surrender to defeat. To miss my train, and to wait in the station for the next one, which was about 40 minutes later. Lousy, but no big deal. BUT, the second was to accept the challenge, and to never give up damn it, and to achieve my desire of getting the heck home.

I took the second option, of course. I got off the subway at that point, and ran like hell in the rain, in my shiny, fancy shoes, and my respectable officiant dress. I wove around slower pedestrians, avoided puddles and bent traffic lights to my will. I made it to the station with one minute to spare, and sweaty and out of breath I was on the train heading home.

At this point the rain was wild, and there were tornedo warnings in my area (this is by no means a usual thing). My husband, my Hermes/Mercury, picked me up at the station and drove us home in those sheets of rain, and as we got close to our new home, that rain stopped, the moon rose, and all was well. I ordered pizza, put on my pjs, poured a glass of wine, and with triumph in my heart settled down to watch Supernatural reruns (please don’t spoil it, I haven’t seen the end of the series yet).

So what is the moral of this story? No moral, but a few realizations. 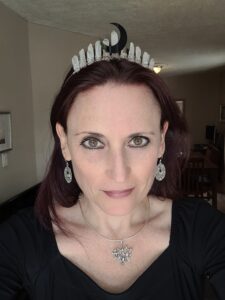 First of all, I realized the importance of accepting your current situation, and owning it, rather than complaining about it or wishing things were different. For me, this is a time of transition as I move from one home to another, and it is going to be messy for a while, and that’s ok.

Second, accepting your situation and owning it doesn’t mean surrender or defeat. You can see your situation for what it really is, and then decide to work with it in the best way you can, while being bloody-minded and determined to achieve the best possible outcome.

Third, trust in your ability to figure things out, to be resourceful, and to rise to the challenge, even if it isn’t pretty.

I know this is a silly story, and it doesn’t really matter in the grand scheme of things. But for me, it made me remember my power, my determination, and reminded me how good it feels to have a personal triumph, even if its a small one.

And of course, this brings me to Tarot. 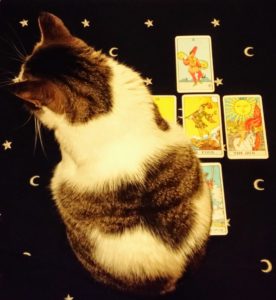 The cards are really good at showing us the reality of where we are now. They show us things we may not want to see, but it would do us good to see. They also show us our strengths, the resources that we can call upon, and inspire us to hope, strive and triumph. The cards help us to own where we are now.

The cards give you perspective when you’re in a difficult situation of any degree. They remind you of who you are, and what you’re capable of, and show you what you’ve got to work with.

The cards show you options and help you to decide how you’re going to navigate whatever it is you’re dealing with. They help you to reach your goals if that is in the cards so to speak, to find peace of mind, or to reach an outcome that sits well with you.

The cards will always help you to figure things out. And give you a kick in the butt or a big hug when needed.

Need some inspiration and some help figuring things out? I’m here, let’s pull some cards together.

Book a Reading with Lori

Don’t take the magic out of Tarot
Tarot that ACTIVATES: Introducing the Unifying Consciousness Tarot

One Response to Figure it all out with Tarot