By innergoddesstarot on October 24, 2022 in Major Arcana, Tarot 0

Over the past few months I’ve been introducing you to the world of the Tarot. We’re starting with the Major Arcana cards, the heart of the Tarot deck, the universal archetypes that resonate with us human beings at the soul level. Last time we explored an unlikely pairing, the traditional Hierophant and the passionate Lovers. Now, we move forward to the next two cards in the deck, The Chariot and Strength.

A traditional Tarot deck has 78 cards. 22 of these are called the Major Arcana, and they are numbered from zero to 21. The Major Arcana, or “Big Mysteries”, represent the archetypes, lessons, milestones, initiations, opportunities for growth and transformation that we encounter as we live our lives on earth in these ephemeral physical forms. When they appear in your Tarot readings, pay close attention to them, because they always deliver a significant and helpful message.

And now, let’s move on to the next two cards in that Fool’s Journey. First, The Chariot, Arcana 7. 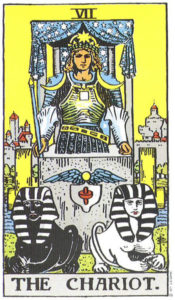 Once it gets going, the Chariot is an unstoppable juggernaut. That Charioteer wants to move, and to get things rolling. He’s in the driver’s seat of his own life, heading out to conquer the world, and nothing is going to get in his way.

There is an abundance of confidence here. The Charioteer has learned a few things about life, and although he still has much to learn, he has trust in his skills and ability to handle himself based on past experience. He is ready to leave home, or what is safe and familiar, and make his fortune.

The Chariot is a bright, active card, but when you look closely some mysterious details are revealed. Notice the stars on the canopy above the driver and on his crown, and the moons on his shoulders. There seem to be planetary symbols on his belt, and glyphs on his kilt. The staff he holds looks a lot like a magic wand. So, the Charioteer is a warrior but he also has access to divine guidance, intuition, and a greater purpose than he may be aware of at the outset of his journey.

So, what does it mean when The Chariot appears in your cards? 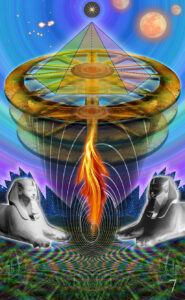 The Chariot from the Unifying Consciousness Tarot

When the Chariot appears, you’re getting the green light to move forward in your life. There is momentum behind you, and you should make the most of it. Keep in mind, however, that you need to have a target or a goal that you are aiming for. If you do, you’ll certainly reach it. If you don’t, you might go around in circles for a while, or go off-roading, or take a much more scenic route than you intended. You’re about to move, but if you don’t know where you’re going, how can you ever get there? 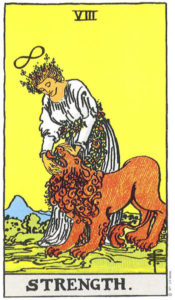 The larger-than-life figure on this card is taming a lion. She doesn’t quite look like a human woman, perhaps she is a nature Goddess, or the personification of the power of the divine feminine. She gently closes the jaws of a fiery, red lion without fear, and he responds by putting his tail between his legs like a puppy. She’s like a mother calming an agitated child, she soothes, but she won’t put up with any nonsense. Strength is a lion tamer, but she doesn’t use a whip and a chair to subdue that cat. She comes from a place of understanding and love, as well as gentle but firm determination.

So, what does it mean when Strength appears in your cards? 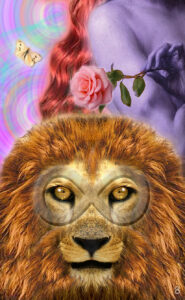 Strength from the Unifying Consciousness Tarot

When Strength appears, you know that challenges lie ahead. But, you can rest assured that you have all the inner strength you need to navigate and conquer those challenges with poise, compassion and composure. You actually have deeper resources of strength that you aren’t yet aware of, waiting to be accessed when you need them.

Ask yourself who or what that lion is. If it is a partner, a child, a friend or colleague who is causing you aggravation, treat them with love and respect but don’t let them bite or claw at you. If they are in a place of anger or they want to cause conflict, don’t get drawn in.

If that lion is you, be kind to yourself. Acknowledge what is causing you pain, or anger or fear, without self-recriminations or judgement. Also, don’t try to tame your creativity and passion, learn how to channel it into something productive and enriching instead.

What do you think of The Chariot? Are you ready to hit the road? Do you know where you’re going? And Strength, what does it mean to you? Are you ready to trust in your own strength and meet what ever comes with faith in your capacity to navigate it?

Next time I’ll introduce you to the next two cards that the Fool meets along his journey, The Hermit and The Wheel of Fortune. I hope you’ll come along for the ride!

Intro to Tarot: The Hierophant & The Lovers
Open your all seeing eye with the Unifying Consciousness Tarot