By innergoddesstarot on January 16, 2023 in Learn Tarot Reading, Major Arcana 0

Over the past few months, I’ve been introducing you to the world of the Tarot. We’re starting with the Major Arcana cards, the heart of the Tarot deck, the universal archetypes that resonate with us human beings at the soul level. Last time we explored a couple of strong-willed and unshakable cards, The Chariot and Strength. Now, we move forward to the next two cards in the deck, The Hermit and The Wheel of Fortune.

A traditional Tarot deck has 78 cards. 22 of these are called the Major Arcana, and they are numbered from zero to 21. The Major Arcana, or “Big Mysteries”, represent the archetypes, lessons, milestones, initiations, opportunities for growth and transformation that we encounter as we live our lives on earth in these ephemeral physical forms. When they appear in your Tarot readings, pay close attention to them, because they always deliver a significant and helpful message.

And now, let’s move on to the next two cards in that Fool’s Journey. First, The Hermit, Arcana 9. 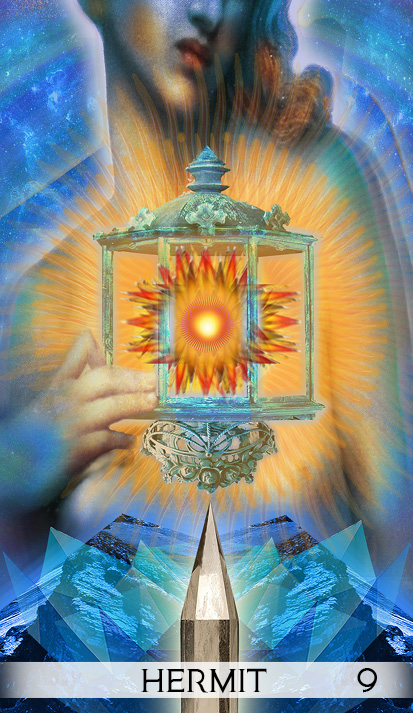 What’s the first thing that comes to mind when you hear the word, “Hermit”? The Hermit is alone. He’s the epitome of being alone. He’s not lonely, but he’s chosen to be on his own so that he has the space and time to look within himself and find the wisdom that he seeks.

You can see that the Hermit is old, perhaps ancient or outside of time, with his long white beard and his motionless, statue-like pose. His hooded cloak looks like it is made of stone, it acts as camouflage. The Hermit wants to blend in with the rock of the mountain he stands on, with the walls of his cave or the gray sky behind him. He’s just fine on his own, he has his staff to support him and his thoughts to occupy him.

The Hermit is the curmudgeonly old sage that you know from many fairy tales, the one who would all rather stay in their isolation, living the simple life of a scholar, but inevitably the world needs their wisdom and seeks them out. The star in the Hermit’s lamp shines bright, sharing his knowledge, and providing guidance and direction for those who need it.

So, what does it mean when The Hermit appears in your cards? 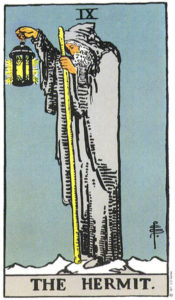 If you’re craving some alone time, take it, without apology. If you need to dedicate all of your attention to completing a particular project, or you’re feeling introspective and want to explore the pathways of your own mind, retreat to your own Hermit’s cave. If this results in pressure from loved ones or friends who want your attention, kindly but firmly let them know that this is nothing personal, in fact it has nothing to do with them, but you will be unavailable for the foreseeable. Time alone will give you better perspective and reveal the answers you need.

When the Hermit comes up in regards to a romantic relationship, this isn’t the best time to pursue one. You’re better off on your own until you figure things out. Also, if you are in a relationship, you or your partner may need some of the dreaded “space”. Take it or let them have it, whoever is embodying the Hermit isn’t in a place for emotional declarations or constant companionship. Keep the lines of communication open, but don’t expect too much. If you or your partner have a Hermit temperament at heart, and the other person doesn’t, this is a situation that calls for understanding and respect, otherwise you could fall into a pattern of conflict or hurt feelings.

And now, meet The Wheel of Fortune, Arcana 10. 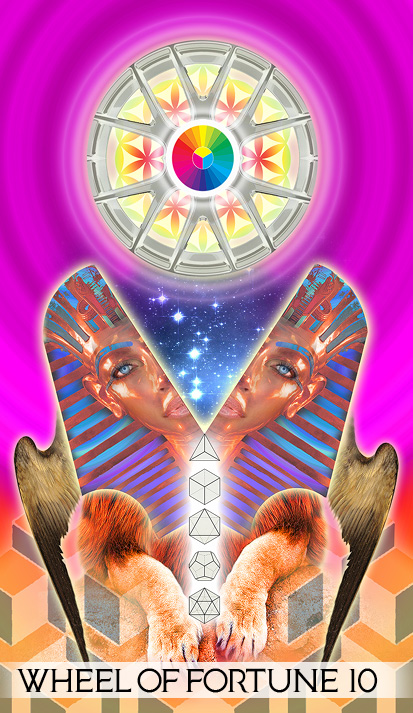 This card is absolutely dripping with enigmatic symbols, so much so that you may get the feeling that you’re not supposed to understand what’s going on here. You can break them down, one by one, but first, allow yourself to appreciate the magnificent atmosphere of mystery. This is the spirit of the Tarot, mysteries waiting to be revealed.

The Wheel itself, which looks a lot like a compass or the wheel of a ship, is in the center of this strange scene. There are two sets of letters in the outer ring. We see TARO, or TAROT if you go full circle. They also spell TORA, the Hebrew book of God’s wisdom and law, and ROTA which is latin for “wheel”. The Tetragrammaton, Hebrew letters forming the powerful, unutterable name of God, appears between those letters.

Alchemical symbols are inscribed in the center of the wheel: mercury (air), sulfur (fire), water (water) and salt (earth).

The four book-reading creatures in the corners of the card are often associated with the four fixed signs of the Zodiac. The Angel is Aquarius, the eagle is Scorpio, the lion is Leo, and the bull is Taurus.

A snake undulates down one side of the Wheel representing the dangerous god Typhon. Another god, Anubis, gently cradles the Wheel on the other side. He looks like a demon, but he is actually a helper who conducts souls to the afterlife and rebirth. The Sphinx sits at the top of the Wheel, inviting you to answer her riddle so that you can move forward but she’s not going to give you any hints.

Are you overwhelmed? The Wheel can be destabilizing. It has a feeling of luck and opportunity, but also uncertainty and the unknown. One thing we do know for sure, the Wheel brings change. What that will look like, we just don’t know.

So, what does it mean when The Wheel spins into your cards? 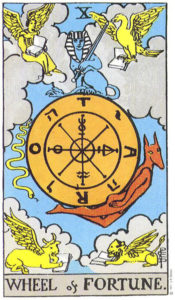 When I read the Tarot, I always stress the notion that we have free will, that we can make our own decisions, and that our futures aren’t entirely set in stone. This is the one card that throws that idea for a loop. When it appears, all we can do is spin that wheel, hang on, and see where it takes us. At best we can strive to be the calm hub at the center, because change is coming, and things are going to start moving and take on momentum.

If you’ve been feeling blocked in some area of your life, the Wheel lets you know that the situation is ready to shift and move. Watch for opportunities, and decide quickly if you’re going to seize them or not. These are limited time offers, and if you don’t jump on them, the wheel will turn and you’ll have to wait for them to come around again.

The Wheel is also a force of karma. What goes around comes around, for good and bad. If you’re down, know that you may be going up, and vice versa. Make the best of what life throws at you, no state of being is ever permanent.

What do you think of The Hermit? Can you relate? Do you enjoy your own company best? And The Wheel of Fortune, what does it mean to you? Are you ready to spin the wheel and let it take you where it will?

Next time I’ll introduce you to the next two cards that the Fool meets along his journey, Justice and the Hanged Man. I hope you’ll come along for the ride!

The card images are from the traditional Waite Smith AND my deck, the Unifying Consciousness Tarot, co-created with Leo Scopacasa of Orbital Arts Gallery. Want a copy of our deck? The pre-order shop is NOW OPEN here.